Archive building in Loisaida means stitching together the odd artifacts that come our way. The aim of these two distinct undertakings is to reveal, restore, conserve, and increase the material lifetime of key artworks made by Loisaida residents and icons that have significantly contributed to the character, cultural organizing and aesthetic representation of the neighborhood. Funded through the Cultural Immigrant Initiative, the projects safeguard tangible cultural heritage while ensuring its accessibility to both present and future generations.

Semillero Restoration Projects aims to support the restoration of key artworks made by Loisaida residents and icons that have significantly contributed to the character, cultural organizing and aesthetic representation of the neighborhood. “The corner of East 9th Street and Avenue C looks rather naked to some local residents. But it’s not because it is February and the trees are bare. It’s because La Plaza Cultural de Armando Perez Community Garden, located on that corner, is bereft of the iconic public art project which adorned its fence. The Winter Flowers by artist Rolando Politi are down for now, but they may sprout up around again…Before each flower was made and hung on the fence, they were hand-picked from the local waste stream by Mr. Politi. As he says, “ their reuse implies social responsibility. Ever since the Eighties, I have felt that we use an excessive amount of consumer packaging.” One of his first “solo” exhibitions was held at the original ABC no RIO and was titled “Packaging Inferno”, well before recycling became mandatory in New York City.”
– Harry Bubbins, GVSHP 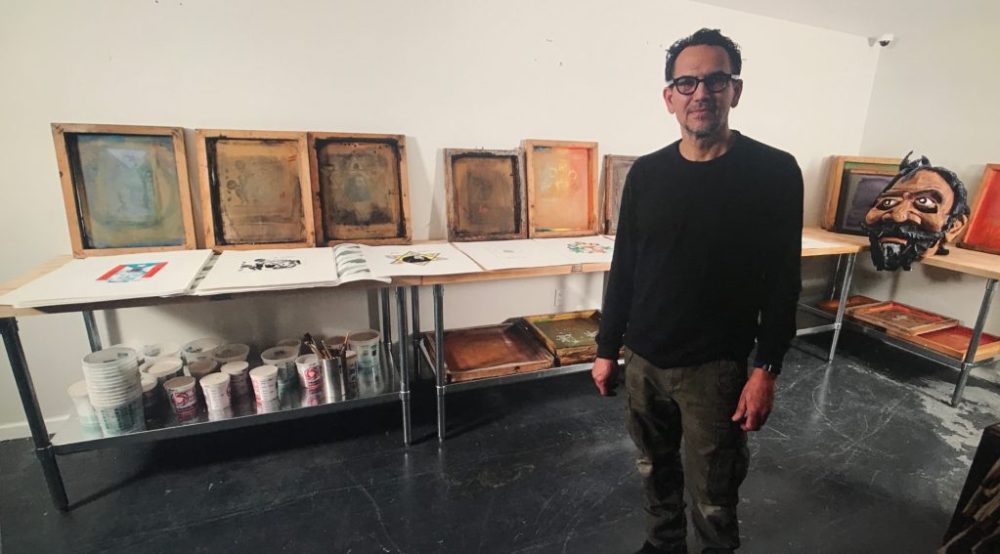 A series of extant and unpublished prints by the great Loisaida poet, playwright, community organizer, and sweat equity activist Bittman ‘Bimbo’ Rivas. Better known for his poem, for the foundational poem ‘Loisaida’ which coined the term, Bimbo Rivas also was a gifted print-artist. His family entrusted Loisaida Inc with a handful of his original tattered screens, part of a much larger body of work, and we took upon ourselves to restore them, and stitch them into the evolving archive that forms part of our community’s memory; the prints represent part of the invisible creative drive of our neighborhood, and we hope can offer a higher-resolution image of the body of work that Bimbo Rivas legated to us all. Mauricio Trenard is our screen printing teaching artist and “restaurador”  of the three decades old screens. Carlos “Chino” Garcia, is Bimbo’s best friend and collaborator in many staple neighborhood projects – from experimenting in eco-urban initiatives, cultural organizing through street performances, to the foundation of CHARAS/ El Bohio community center- the duo has countless contributions to the lore and life-blood of Loisaida /LES.