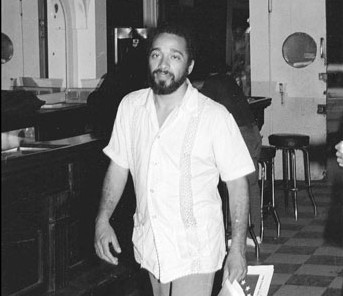 The purpose of this activity is to:

1. Recognize the Lower East Side neighborhood legacy of the Young Lords Party.

2. Honor the 25th anniversary of the passing of Eddie Figueroa, the founder of the New Rican Village Cultural Arts center, whose battle with cancer ended in 1990.

Starting with the Young Lords Party’s (YLP) official announcement at Tompkins Square Park in 1969, the ¡Presente! exhibition highlights the important activism spearheaded by the YLP as it operated within the context of the Lower East Side.

One of the institutions that came out of this era was the New Rican Village Cultural Arts Center (NRV) established by Lower East Young Lord member, Eddie Figueroa. The NRV, is an overlooked and under-appreciated Loisaida cultural arts institution that was as an aesthetic laboratory for a working-class, Puerto Rican/Latin@ avant-garde arts community since it opened in 1976 through its closing in 1979 (it continued to exist in other locations throughout New York City).

This art collective’s goals fostered a social surrealism that sought to transform both aesthetic forms and neighborhoods. The inter-arts community of musicians, poets, painters, actors, dancers, sculptors, and visual artists at the New Rican Village envisioned the importance of building community art spaces and political sovereignty by establishing and building an independent, community-based arts institution and also contributing to a Latin@ cultural arts scene within New York City, helping establish a Latin@ Cultural Left that was emerging among various Puerto Rican/Latino cultural arts centers at the time. Finally, the NRV helped to foster a New Rican Renaissance that celebrated a marginalized identity, and also translate the zeitgest of resistance and aesthetic and intellectual exploration into various art forms.