Loisiada Inc. will focus on the Young Lords’ founding and impact in the Lower East Side—displaying rarely seen photographs, posters, and audio and video recordings of live performances.  The exhibit begins with the announcement of the founding of the New York Chapter of the Young Lords at Tompkins Square Park on Saturday, July 26, 1969. The exhibition will feature lesser-known perspectives of the Young Lords legacy within the Lower East Side, and their cultural impact upon New York’s cultural scenes.  Some highlights include the organizing efforts of the Gay and Lesbian Caucus, the transgender activism of Sylvia Rivera, and innovative “artivism” generated by Eddie Figueroa, the founder of the New Rican Village, an influential multidisciplinary and cross-disciplinary art space once located at 101 Avenue A. 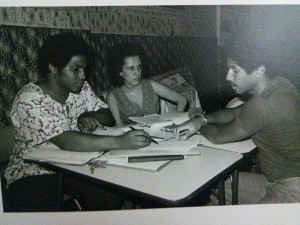 “I was involved with the Young Lords… it was a time of initiation -into ourselves, into the history of our people, and into the deep images of our culture”.

¡PRESENTE! The Young Lords in New York is co-organized by El Museo del Barrio (July 22 – October 17), Bronx Museum of the Arts (July 2 – October 15) and Loisaida Inc. (July 30 – October 10). The multi-venue exhibition is accompanied by an ambitious range of programs and events to build awareness of the Young Lords’ innovative contributions to the struggle for civil rights and influence on contemporary artists, and to spark conversations about grassroots community activism today. For a limited time only, the first 1000 visitors at each partnering organization will receive a commemorative button, inspired by the Young Lords. Collect them all! For more info, please visit our featured items page.

At Loisaida Inc. ¡PRESENTE! The Young Lords in New York was made possible with support from: