Loisaida Inc. Center hosts Silverio Pérez in the presentation and signing of autographs for his new book:

La Vitrina Rota “The Broken Glass Case” or What the hell happened here?

THIS EVENT HAS PASSED. SEE A VIDEO OF THE LIVE BROADCAST BELOW: 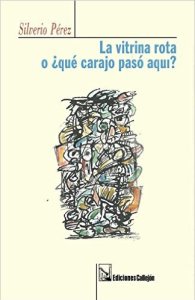 The broken glass case, or what the hell happened here? Is a hybrid text that takes hold of what memory is and what memory offers, it is autobiographical, and a “history-o-graphic” essay. Narrated using the most respectable seriousness, the most pure emotion and a suggestive taunt, it leaves us a text that invites reflection and calm, but also calls to action and maybe encourages a calculated rebellion. All written in a tragicomic or comedic-serious tone so typical of the picaresque narrative that accompanies the Puerto Ricans from a remote past.

What Silverio does in this intense and moving volume is to look at that long 20th century that began in 1898 and continues in 2016, the American century, in the light of a repeated “promise” unfulfilled.

Exceptional witness of the time he has lived will prepare the reader for a time where “history” and “life” converge in an enviable balance.

It is also a historical and vital responsibility, well fulfilled.

Silverio Pérez (born July 18, 1948) is a musician, writer, comedian, entrepreneur and broadcasting media host, born in Guaynabo, Puerto Rico. He is known for several reasons, among them: