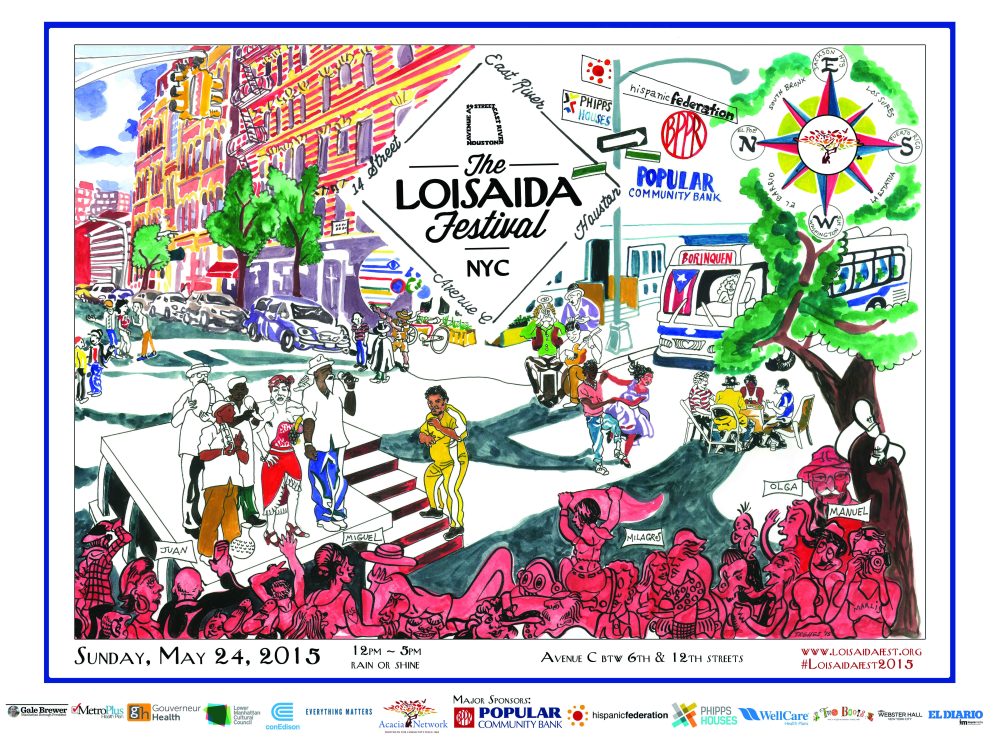 A Festival For All

NEW YORK, NY – On May 24st, 2015 the 28th Loisaida Festival uncovered the Latino spirit still very much alive in the Lower East Side. This year’s Festival created an over-the-top Latin performance art, music, and culinary experience that celebrated Puerto Rican and Latino culture and history, as well as its present and future in downtown Manhattan. Avenue C from 6th to 12th street reclaimed its role as a hub of Latino creativity and culture in the city and the nation, as this year’s festival featured offerings and acts from the neighborhood and from all over the United States, from East L.A. to Puerto Rico.

Kicking off the Festival was a Carnival Procession, a rarity in the downtown area nowadays. The Felix Millan Little League, established in 1977 and named after the famous Puerto Rican baseball player, and the New York Stars and Marching band from Washington Heights led the parade, which culminated in the mainstage, where a host of music genres came together through acts by DMob, Capa Prieto, Calma Carmona, Chicano Batman, E.A. Flow, Papote Jimenez and his Orchestra, and Johnny Olivio y Herencia de Plena. The different genres captured the diverse makeup the Latino community in NYC. The energy of the day was such that Chicano Batman and Calma Carmona delighted the audience with an impromptu jamming session—live. Luis Guzman, a product of Loisaida, captivated the audience with his energy.

Beyond, the Theater Lab, the street performers, the Latino fare and domino tournaments, were also the Viva Loisaida Awards. Announced earlier in the week at a special Opening Reception, the awards themselves were given to four pillars of the community: Nydia Velazquez for her bold leadership, and long-standing support to the Latino community causes. Marlis Momber whose legendary photographic and documentary work has illustrated the struggle and character of the mostly Latinos people living in the Lower East Side since the 70s; Dr. Joseph Kramer, known as “El Doctor del Pueblo,” who served as a doctor to thousands over the years from his storefront on Ave D, regardless of their ability to pay; Lizabeth Bruno whose admirable passion for environmental and social justice issues led her to establish the LES Girls Club CSA; Sammy Tanco, an unquestionable pillar of NY’s Puerto Rican community, respected master of plena music who helped co-organize the first Loisaida Festival along Tato Laviera and has been a figure of social and cultural re-affirmation of Loisaida for over 40 years.

A particularly unique aspect of the Festival, beyond the diversity of offerings, was the wide range of audience members. People of all generations, groups, and countries came together in a single spot. A celebration of all the rich layers, diversity, and textures that made the Lower East Side of Manhattan an iconic neighborhood, the 28th Loisaida Festival provided a delicious shot of Latino culture that left us wanting for more.

ABOUT LOISAIDA INC: Loisaida, Inc. is a Latino-based non-profit community development organization affiliated to Acacia Network. Located in the Lower East Side, it boasts over 30 years of award-winning innovative programs in education, arts, culture and community development focused on highlighting the contributions of Latinos to the vibrant cultural fabric of downtown Manhattan. One of the events Loisaida, Inc. is best known for is theLoisaida Festival, a Festival that has long celebrated Latino culture in the Lower East Side while also highlighting the community’s rich diversity. This year’s event is presented by Popular Community Bank and Acacia Network. Additional major sponsors are the Hispanic Federation, Phipps Houses, Lower Manhattan Cultural Council, ConEdison, Well Care, El Diario la Prensa, Webster Hall, Two Boots, Gale A. Brewer, Gouverneur Health, Rojo Chiringa, among others.