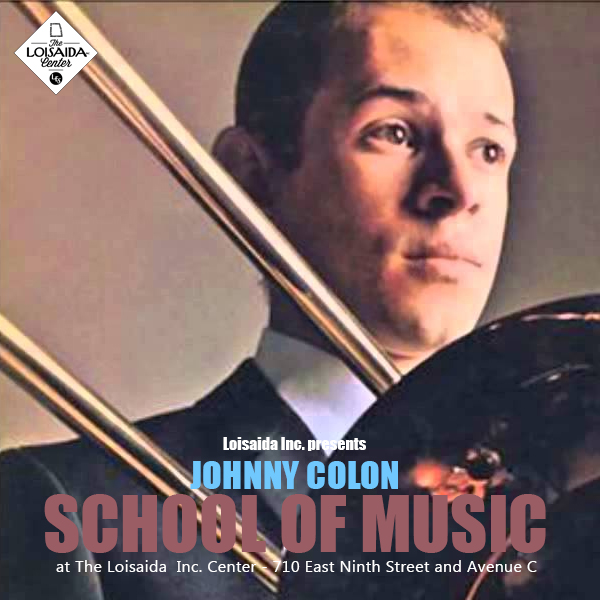 Johnny Colón, was born in New York City to parents of Puerto Rican heritage. He is the director of the Johnny Colon Orchestra, founder of the legendary East Harlem Music School and widely recognized as a major and legendary contributor to the popular boogaloo sound of the 1960s.

Colón, a versatile vocalist, multi-instrumenatlist, arranger and musical director, became one of Latin music’s leading impresarios at the forefront of the new “Latin Boogaloo” sound when he formed the first Johnny Colon Orchestra in the mid 1960’s. He first found success in the world of salsa with his 1966 debut album”Boogaloo Blues” in 1966, which became a classic, selling over 3,000,000 copies worldwide, and which continues to be an anthem for this period on Latin music history. Colón’s hit “Boogaloo Blues” came out during a time of transition in the Latin music scene of New York years before there was such a thing as “salsa,” when the mambo craze was over and Puerto Ricans were coming of age in the city and the “Nuyorican” culture was emerging. As many of their peers went off to fight in Vietnam, some of New York’s younger Puerto Ricans were losing interest in Latin music and beginning to identify more with R&B hits in English than with the music of their roots. Johnny recorded several other notable tunes over the years, releasing five albums over the period 1967-72.

In 1968, with public funding and much of his own money, Colón founded the East Harlem Music School and offered free lessons to the community. His impact as a music instructor for more than three decades may be even greater than the effect of his recordings. Students like the singer Tito Nieves, percussionists Jimmy Delgado and Robin Loeb, bass player Rubén Rodríguez, and singer Marc Anthony would all go on to become stars in salsa and contemporary Latin music. By the mid-1990s, Colón was struggling to secure funding to maintain the school open. In 2004, unable to keep a permanent space for his school, Colón was given the opportunity to bring his brand of music education to New York City public schools. Today, as well as teaching in schools around the city, Colón has begun giving music classes to patients at drug treatment centers. He’s found a new location for his school at The Loisaida Inc. Center.