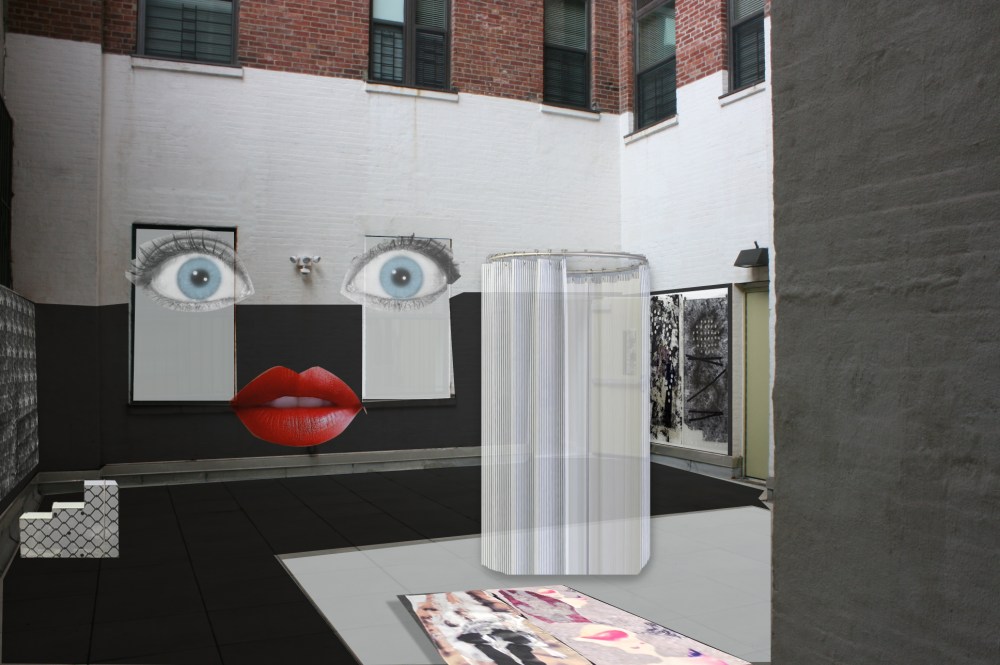 Final Presentation / Opening day of our visual artist in residence:

with Sound Performance by Stephen Decker at 7:30 pm

In her own words:

Over the field, up the stairs, under the bed, through the door, under your feet, the things you can manage and the things that shrink you down in size. “Guliver X” is an installation that was initially conceived as a map of objects in space.

With each of these changes she must reevaluate her position in space and how this affects the world around her: when she is a giant she can potentially crush the people of the island, and when she is as small as a mouse she must fight a rat in order to survive.

Escudero appropriated the literary source and modified it for her own use, imagining this character as a post-gender one. She also explores the connection of the book with the idea of visiting different islands, since the island of Manhattan is so closely connected to the Puerto Rican island.

Even though the initial inspiration is fantasy-based, the actual objects produced are a result of a concrete movement through urban space, in particular that of the Loisaida neighborhood. Escudero collected hundreds of images from weekly excursions, principally through the Loisaida gardens, but also paying attention to urban detritus and anything that caught her eye along  the way. These images were fused into the objects: a chain link fence merged into a staircase; a piece of a wig which mixes in with grass and becomes contained in a puzzle; flowers, cigarettes, mirrors and statues become a face.

The goal of the placement and scale of the objects give the viewer a chance to look through holes, to crouch down or look up or go through the pages of the book. The oversized book reminiscent of taxonomic books is part of an ongoing exploration of the human silhouette as a placeholder for visual information and materiality that we all have access to in our day to day. There is a back and forth between 2d and 3d and a strong emphasis on the act of looking. In addition to spending time walking around the neighborhood she began to research its history and how different factors have molded and affected the local throughout time.

This installation will serve as a site-specific performance by Stephen Decker utilizing a live radio broadcast for web browser. Those in the audience will be able to experience the work with their mobile devices, thus amplifying the performance through the built in speakers. The performance will involve electronic instrumentation as a way to segue between or interrupt multiple scenarios that will conclude when all audience members’ browsers have been closed, thereby rendering it inaudible.

Stephen Miguel Decker is a Virgina-born artist based in New York. He has participated in a yearlong residency program at the MoMA PS1 Print Shop as a part of the artist-collective ALLGOLD, presented an evening-long performance to inaugurate the Filipino American Museum and extends his activities as a DJ on the London-based station NTS Radio, where he hosts a monthly show (NODE).

Stephen often works with sound as a multi-genre medium that frequently intersects online/transmission-based infrastructures, narrative techniques, graphic representation and the experience that emerges from it. Stephen holds an MFA from the Yale School of Art and is currently a lecturer at The New School, where he teaches classes on experimental publishing and sound art.

Florencia Escudero is an artist from Argentina that currently lives and works in New York City. She is a multimedia artist working predominantly in the field of sculpture, photography, video, and drawing. Her work seeks to explore her sensorial experience of the world through the collection of images and creation of objects. She is curious about how information is selected and processed. In order to understand this phenomenon she explores the relationship between object and image and fact/fiction through collapsing both past and present into the same space.

Florencia has a Master in Fine Arts from the Yale University School of Art (2012) and a Bachelor in Fine Arts from the School of Visual Arts (2010). She received a full scholarship to attend Pilchuck Glass School Residency (2010) and has attended the Nebraska Art Farm Residency (2013). Her work can be seen in different publications such as Trapper Keeper, CREEPS annual and Precog magazine.

Upcoming events as part of the residency: