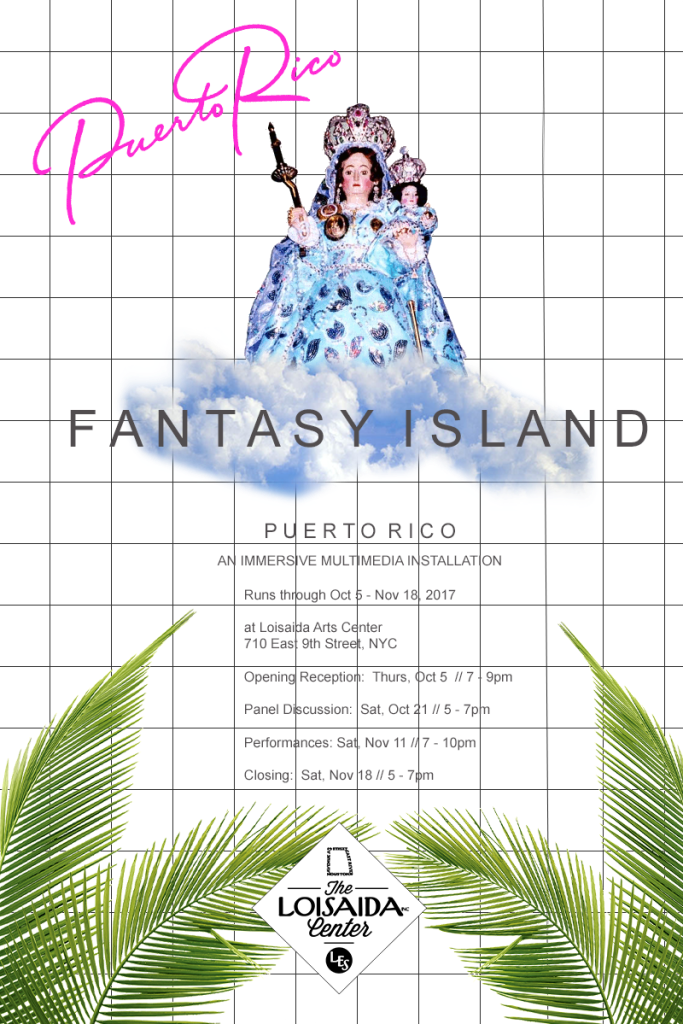 For Shey Rivera Ríos and Huáscar Robles, Hurricane María is an atmospheric manifestation compounded by the fiscal crisis troubling Puerto Rico’s urban landscape. The installation and performance Fantasy Island is an experience that explores how tourism and consumer culture sell a “fantastical” luxury lifestyle, a tropical paradise twisting crisis into “opportunity”. A door opens into a real estate office selling dreams of luxury and reconstruction and the viewer delves into a dizzying spell of animated gifs, performance and altars.

For Fantasy Island, Rivera transformed Loisaida’s space into a real estate office surrounded by a black and white grid that envelops visitors while monitors flash GIFs that borrow aesthetics from the vaporwave movement. In one image, a hand waves a wad of cash to a “Puerto Rico” neon sign while icons of the Virgin Mary and a ram, both cultural symbols of Puerto Rico’s syncretism and colonial history, spin in an enticing, dizzying spell. Viewers are also inspired to reflect on how natural disasters such as the path of hurricanes affecting not only Puerto Rico but also our Caribbean neighbors maybe twisted into “opportunity” after the crisis subsides.

For the Loisaida Center, a cultural enterprise with deep roots in the Nuyorican and Latinx New York community, Fantasy Island stretches the island to New York and its Puerto Rican and Caribbean diaspora as it hits common issues they all grapple with.

The opening reception will include a special performance.

Throughout the fall, and beyond, the Loisaida Inc. Center’s programming will provide opportunities to pledge support to the relief and recovery efforts in the Caribbean.