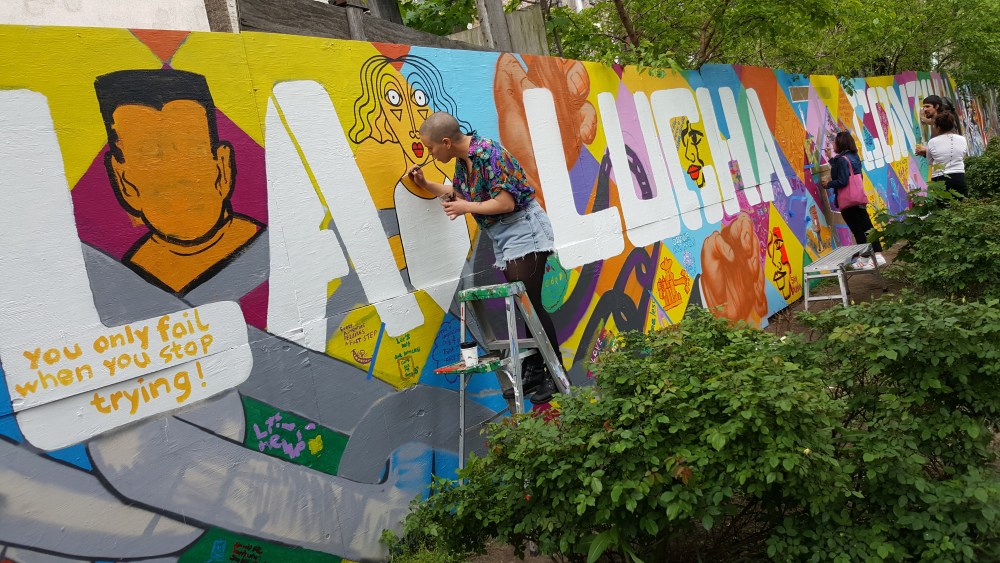 COME PAINT A MURAL WITH YOUR COMMUNITY!

Painting extravaganza opened to the community. Artistic experience not necessary. Participants are not required to attend all of the sessions, only hands and creativity needed to help complete this project!

This event has passed, thank you to all of you that made it possible!

An endeavor hoping to pay tribute to the 30th anniversary of the twenty-six La Lucha Continua murals raised in 1983 by the community mural collective Artmakers Inc. to address six of some of the compelling political issues of the time, issues such as: gentrification, police brutality, immigration, women’s issues, and opposition to U.S. interventions in Central America and apartheid in South Africa. In contrast with much of the art being produced in the neighborhood at the time for the mainstream art market, this was created for the people, a “neighborhood-directed” effort as described in NYTimes.

The mural will be designed and painted by a small group of volunteers called upon by members from each organization; led by artist Sam Wisneski of the Thrive Collective. This collaboration represents a joint effort in calling on members from a surrounding community to speak to their own experiences, thus amplifying the voices of the community by offering up the podium, or in this case rather the paintbrush, to the people. More than a simple retelling of history, this mural can portray our present through past voices.

As the director of The Loisaida Center, Libertad Guerra posits,
“This exhibition is more than an excavation of the past or an exploration of the social, political and cultural context in which the murals were created. It is also a lens aimed at today’s Loisaida, focusing on how the neighborhood and the issues have changed, directing the eye to the future.”

Two from the original twenty-six pieces are still visible at La Plaza Cultural to this day.  Though much of the image from this piece by Susan Ortega has all but withered, the slogan “La Lucha Continúa” remains a powerful reminder to locals in the neighborhood and a reflection of our present through an historical lens.

Production for the commemorative mural coincides with the “La Lucha Continua The Struggle Continues: 1985 & 2017” exhibition currently on display at Loisaida Center.